Wow! If the rest of the 2017 Bomber Football season plays out like the first meeting between Richland and Bellevue then we are in for an incredible ride. A very large Richland crowd featuring what seemed like the entire class of 1981 witnessed a thrilling 24-21 Bomber victory at Memorial Stadium in Bellevue.

Penalties—spefically encroachment and off sides— and turnovers were the rule of the day which is typical of an early season game and both teams spent the first quarter trying to shake off summer vacation.

The action started early in the second quarter with the Bombers at their own 16 yard line. Cade Jensen got into a rhythm and marched the team down the field on a twelve play drive, highlighted by passes to Josh Mendoza, Adam Weissenfels, and Ryan Kriskovich. Parker McCary opened the scoring with a 1-yard run for the touchdown and a 7-0 Richland lead.

Bellevue got the ball and with Isaiah Ifanse carrying the load the Wolverines were looking to score before halftime. Ryan Piper altered that plan, intercepting Joey Echigoshima's first pass of the game giving the Bombers a first down at their own 48 yard line with 34 seconds left in the half. Jensen played the :34 second offense to perfection and Adam Weissenfels connected on a 30-yard field goal with no time left and Richland led 10-0 at halftime.

The Wolverines spared little time after halftime. Isaiah Ifansie (i-Fonzie) pounded the Bomber line on a 9-play drive, and pushing the ball in from the 4-yard line to cut the Bomber lead to 10-7.

The Bombers struck back quickly when Cade Jensen connected with Josh Mendoza at mid-field. Mendoza then made a series of incredible moves and turned it into a 78-yard touchdown. Less than :45 seconds later, the Bombers were back in control at 17-7.

Isiaih Ifansie then decided to take over the game. Foregoing any pretense of a passing game, the Wolverines road Ifansie to his second touchdown to cut the lead to 17-14. The Bombers got the ball back and looked like they would extend their lead again, including a 29-yard pass to Piper to get them to mid-field, but an errant handoff caused a fumble and Bellevue was back in action.

Nine plays and taking up almost half the fourth quarter, the Wolverines took their first lead of the game when Ifanse scored on a 2-yard touchdown run. 21-17 Bellevue.

Disaster struck on the Bombers next possession when Bellevue recovered another fumble, this time deep in Richland territory at the 27-yard line with 7:13 remaining.

The Bomber defense decided enough was enough. Aided by a holding penalty, Richland quickly extinguished Bellevue's party, forcing a punt and handing the ball back to the offense with 3:57 left in the fourth quarter.

Cade Jensen then went to work with a series of quick sideline passes. Seven yards to Parker McCary. Seven and six yards to Sammy Cervantes. Seven yards to Tyler Fishback and then, sensing that time was running out, 43 yards to Josh Mendoza inside the ten. Parker McCary then rolled the final nine yards for the touchdown, putting the Bombers up 24-21 and the crowd into a frenzy.

The problems: Richland left 2:31 on the clock; and for Bellevue, the Bomber defense.

Following a couple Ifanse runs, the Wolverines were forced to throw. Suddenly, Echigoshima was covered in white Bomber jerseys. Intentional grounding, a sack, and an incompletion pushed the ball back to the Bellevue 22. The Hail Mary garned only three yards and the Bombers took over on downs.

Next week, the Bombers will host the Wenatchee Panthers in another tough non-conference game. We hope to see you there. 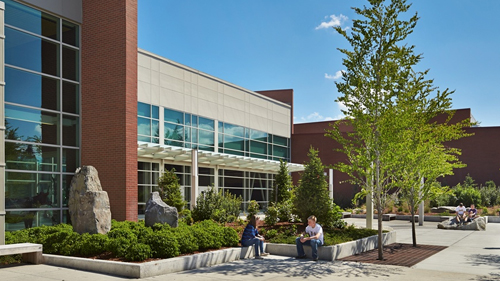