The Lewis and Clark Tigers came to town trying to extend their lifetime winning streak at Fran Rish Stadium to three games over the past 36 years, but this year's version of the Richland Bombers shut them down and sent them home to Spokane with a 42-20 victory.

The game got off to a quick start when Paxton Stevens connected with Rhett Levin on the first play of the game for a 36 yard gain that put the Bombers deep in LC territory at the 22 yard line. Lakota Wills then polished off the remaining yards on three plays, scoring a touchdown from twelve yards out giving Richland a 7-0 lead with 10:38 remaining in the first quarter.

The Bomber defense on the other hand only needed 5 plays before forcing a Tiger punt and giving the ball back to the offense at the Richland 27. The Bombers then embarked on a 17 play drive which was extended after the ninth play when Lewis and Clark committed a pass interference penalty. Paxton Stevens then connected with Griffey March for 16 yards, and Rhett Levin for another 14 to get the ball down to the LC 4 yard line. Paxton then finished the drive off by himself, running the ball in to give Richland a 14-0 lead with 3 minutes remaining in the first quarter.

Lewis and Clark countered with a 14 play drive of their own. The Bomber defense was not letting the Tigers move on the ground  so Jordan Summers did most of the work with his arm, finding Adam Thompson in the endzone from 7 yards away to cut the Bomber lead in half at 14-7.

Richland's next drive was another extended affair lasting 15 plays and chewing up 6 minutes of the second quarter. Paxton Stevens found Rhett Levin in the endzone from 6 yards out and the Bombers extended their lead to 21-7 heading into halftime.

The second half began with neither team seeming to want to keep the ball. LC's first drive was shortened when Griffey March intercepted a Jordan Summers pass and returned it to the Tiger 41 yard line. Hoping to capitalize quickly, Paxton Stevens returned the favor when Cameryn Shon of LC intercepted his pass at the 15 yard line. The Bomber defense was not in a good mood forcing a three and out, giving the offense good field position at the 50 yard line.

Paxton Stevens completed a pass to Alex Chapman for 31 yards to highlight their 8 play drive. Kyle Whitby finished it off from four yards out and the Bombers had a very comfortable lead, 28-7.

The defense again forced the Tigers to punt but this time Lakota Wills tracked down the rugby punt and blocked the kick handing the ball over to the offense at the LC 30. It looked like the Bombers would be forced into their own three-and-out but on 4th down Paxton Stevens through a beautiful pass that found the outstretched arms of Alex Chapman to push their lead to 28 points at 35-7.

Lewis and Clark countered and seemed to be finding their rhythm against the formidable Bomber defense. Jordan Summers passed 28 yards to Camryn Schon to put the Tigers on the Bomber 35. Then after a series of runs, Summers passed to Adam Thompson who scored his second touchdown of the game and cut the lead to 35-14.

Then things got weird. The officiating crew was already experiencing a little of their own version of "Alexander and the Terrible, Horrible, No Good, Very Bad Day" but it seemed to go off the rails when the Tigers tried to perform an onside kick. On the first attempt, Leo Haghighi recovered the kick but he actually touched it at the 9 3/4 yard mark. On the second attempt, Griffey March recovered the kick well inside the 10 yard DMZ but was then flagged for an offside penalty. Finally, the last onside kick attempt fell innocently into Bomber hands. Of course, two plays later Paxton Stevens was intercepted by Ryan Meyer and coupled with a Richland unsportsmanlike conduct penalty, the Tigers got the ball at the Richland 7 yard line.

One play later Summers found Leo Haghighi for a 7 yard touchdown. The Bombers did block the kick but the Tigers were making it interesting at 35-20. Things got even more interesting for the Tigers when James Aragon recovered a fumble three plays later giving them the ball at the Bomber 37 yard line.

The Bomber defense decided enough was enough as Alex Chapman intercepted a Summers pass ending LC's chances of cutting the lead any further. The Bomber offense then went no-nonsense on their own, embarking on an 63 yard, 10 play drive. All of which came on the ground. Lakota Wills did the most damage with a 28 yard run that put the Bombers deep into Tiger territory. Kyle Whitby scored the final Bomber touchdown on a 3-yard run and Richland jumped ahead 42-20.

Ryan Piper put the icing on the cake when he intercepted another Summers pass in the endzone and ending the Tigers' dream of making a comeback.

This was a very solid test for the Bombers and will serve them well as they move into the State Playoffs. Lewis and Clark scored more points than any other team Richland has played so far. The Tigers also put up enough fight to let the Bombers know that they need to keep their emotions in check as they go deeper in the playoffs.

Next week, the first round of the playoffs come back to Fran Rish Stadium as the Central Valley Bears from the Greater Spokane League come to town fresh off a 24-13 victory over the Chiawana Riverhawks. The game is next Saturday afternoon at 1:00pm so clear off your schedule and get ready for some great Bomber football in the daytime.

Spokesman-Review: Richland knocks out Lewis and Clark in 4A play-in game 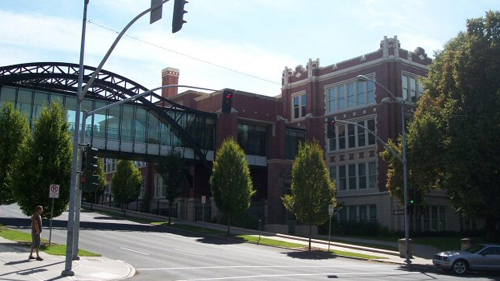