When it comes to the state playoffs, no game is a gimme, and when there are only eight teams left you can be sure they're all good teams. The Bothell Cougars presented a challenge the Bombers hadn't seen much of this season—a team that could pass and run, played good defense, and had a quarterback already committed to a major Division 1 school. Although Bothell had lost two games, they were both to teams that have been ranked in the top ten this season and both teams (Skyline and Woodinville) made the state playoffs as well. If the Cougars had anyone worried about bringing Richland's season to an end, the Bombers didn't get the message.

Both teams came out fired up, and Bothell seemed ready to replicate Sunnyside's game plan of stopping the run, but appeared to like their chances of stopping the Richland passing game with their taller and faster secondary. The third play of the game saw the Bombers connecting with a haymaker, Paxton Stevens lobbing a pass from the 25 to Gaven Brasker streaking down the right sideline, catching it at the far 30, and finding the end zone with no one around, but it was called back on Richland's second penalty (two penalties in the first three plays is a good summary of the first quarter for Richland).

Two plays later Stevens found Brasker burning his man again, this time on the left sideline, and dropped him a 47 yard pass at the 15 where he went out of bounds. After Stevens juked half the defense on a 19 yard run, Ben Stanfield took the handoff and went left, darting through a gaping hole provided by 600 pounds of Dantae Powell and Brigham Whitby. It took some big plays, but Richland was up 7-0 with nearly 9:00 to play in the first quarter. Bothell showed systematic poise on their drive, frustrating the Bomber defense with a good combination of running and passing, which culminated in a 2 yard scrum for the tying touchdown.

After forcing Richland to punt on consecutive possessions, Bothell took the lead early in the second quarter on a 62 yard bomb, despite quarterback Jacob Sirmon taking the first of what would be several big hits from linebacker Victor Strasser. Getting good field position from a Brasker kick return to the 50, Richland used moderate runs and passes, plus a 15 yard pass interference penalty, to get to the 10, where Parker McCary ran up the middle to tie the game at 14 with the first of his two rushing touchdowns, and the first of five unanswered touchdowns by the Bombers.

Bothell's next series ended with a Garrett Guffey interception at midfield, aided by Whitby swatting the ball as it went over his head. From there the rout was on, again despite plenty of penalties for Richland (anyone up for second down and 24 on consecutive holding penalties?), with McCary getting his second score from 15 yards out with 3:27 to go in the half. Being up 21-14 against a highly touted team only two years removed from a state championship season isn't bad, but the Bombers weren't settling. Strasser recovered a forced fumble at the 25 with only 11 seconds gone off the clock, and from there Stanfield cut left out of the middle of the pack to outrun everyone to the left corner of the endzone, a 22 yard touchdown to make it 28-14 with 2:38 left. The Cougars next offensive play was haunted by Strasser again. With another punishing hit on the QB, the ball was short and picked off by Adam Weissenfels, who returned it to the line of scrimmage. Alex Chapman finished off the short drive with a 7 yard catch to make the score 35-14 with under a minute to play in the half. The Cougars made some head with big passes, but the QB, while being tossed by Whitby, threw an off-balance pass which Ryan Piper promptly snatched at the 5 and returned to midfield, essentially ending the half.

Being up three touchdowns on a ranked team is good, but with two full quarters of football to play there wasn't quite enough breathing room. At their own 40 yard line, Bothell went for another deep pass, but Whitby, dragging an O lineman behind him, could not be stopped as he clobbered his way to the QB to cause a fumble. Guffey recovered, and Richland had great field position again. After an incomplete pass, Stanfield took the handoff again with a luxurious view of the field in front of him, provided by a key block by his younger brother Jacob Stanfield at tight end, as well as every offensive lineman dominating his defensive counterpart. With the D line occupied and/or on the ground, the older Stanfield had only to zigzag around three or four defensive backs for his third rushing touchdown of the game. 42-14 with 10:00 to go in the third quarter was a long road for the Cougars.

Obviously feeling the rush, Bothell used big plays to get within striking distance, scoring on a 30 yard pass into double coverage to make it 42-21 halfway through the third quarter, using up nearly four minutes in the process. Following suit, RIchland chewed time off the clock by staying on the ground, but with a 15 yard McCary run called back on a penalty, the Bombers decided to pad the lead a bit more. From the 35, Stanfield drifted left into open space to catch a short pass from Stevens, then cut a sharp right against the flow of blockers and sped past the flatfooted defenders. One last block by Aric Davison gave Stanfield all the room he needed as he outran the trailing defense to the right corner of the endzone for his fourth and Richland's final touchdown, going up 28 points with 2:48 left in the third.

The fourth quarter was a formality for the Bombers. Sacks on consecutive plays by Jax Lee and then Victor Strasser and Braden Powell showed they were determined to prevent a comeback. By this point Bothell had been thoroughly hammered by the ferocious Bomber D and clearly didn't want any more of it. They managed another score against the reserve defense, and attempted to salvage some pride with on onside kick, but MacCary was there and took it down to the 10 yard line where the rest of the time was burned off the clock.

Coming off a game with no rushing touchdowns and six passing, Richland showed their diversity by using a dominant O line to score five on the ground and two in the air, with Stanfield and McCary combining for 171 yards and Stevens throwing to six different receivers for 162 yards. Despite giving up height to the tall Bothell receivers, Richland's DBs executed well and prevented a lot of big plays, as well as picking off three passes from a quarterback who had thrown only two all season. The DBs were helped tremendously by the pressure applied by the D line and linebackers, giving Sirmon little time to locate his receivers. Strasser and Guffey had a huge game and, as always, Whitby added to his case for MVP with his relentless attack on offense and defense. After some first quarter struggles, the defense adapted and solved Bothell's attack. In contrast, Bothell stayed with their three-man front for too long, and the adjustments they made to stop Richland's ground attack came too late. The Bombers put up 49 points in three quarters on a good Bothell team which had allowed more than 30 points only one other time all season and took advantage of the many turnovers provided by the defense.

Saturday the 26th at 3PM the Bombers take on the Skyview Storm at Lampson Stadium. SKyview is 9-3, with the three losses coming against top ranked 3A teams Eastside Catholic and O'Dea, and their conference rival Camas. The winner of this game goes to the state title game in Tacoma. Come out and help the Bombers stay undefeated at Lampson this season. 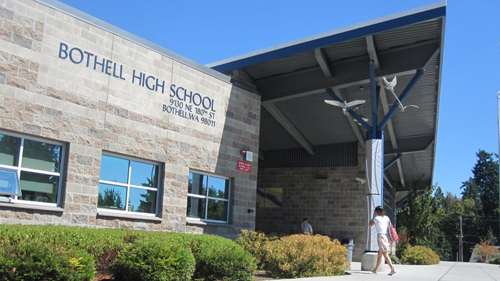