The answer to all three questions turned out to be Adam Weissenfels. I mean, yes.

A full house witnessed a great high school football game and rivaled the Bellevue game for drama and intensity. Intensity that comes with playoff survival on the line.

The Bombers received the opening kickoff, which itself provided some drama when the ball decided to pop out of Cody Sanderson's hands. Luckily, Cody had his eye on the ball, recovering nicely and gaining a few more yards in the process. The offense, though, sputtered a bit coming out of the gate and were forced to punt.

The Bullpups received the ball on their own 37 yard line and proceeded to run seven straight times, splitting the duty between Kasey Anthony, Devin Culp and quarterback Connor Halonen. Lulled into focusing on the running game, Halonen connected with Eric Floyd for 19 yards and a 7-0 Gonzaga Prep lead.

Richland received the ball at their own 28 and returned the favor by giving the ball to Parker McCary. McCary had four runs and Jared Whitby added another. Whitby's run was aided by a 15 yard facemask penalty and put the ball on the Gonzaga 25 yard line. Cade Jensen then found Adam Weissenfels who somehow got his tiptoes down in the endzone for the touchdown. The Bomber point after attempt was blocked and the Bullpups retained the lead at 7-6.

The Bombers were able to force the first Bulldog turnover when Josh Mendoza recovered a fumble on the Bullpups next posession. The Bullpups returned that favor a few minutes later, blocking Cade Jensen's punt. Fortunately for both teams neither mishap cost them.

Richland had the ball for ten plays between the first and second quarter but the drive fizzled and Prep got the ball on their own 15 yard line. Adam Weissenfels then came up with an interception at the 25 yard line and had pick-six on his mind but was cut short at the 9 yard line. Three plays later, Jared Whitby took the snap directly and bowled across the line for a touchdown and the Bombers first lead. Parker McCary ran in the point after but was hit and fumbled at the goal line but an alert Ben Dezember pounced on the ball to preserve the two points. McCary was apparently across the goal line when he fumbled but Ben's hustle deserves some print. 14-7 Bombers.

For most of the first half the referees were keeping a very tight lid on things. During the second quarter they wrapped it in duct tape.

After a Prep three-and-out the Bombers started their drive on their own 34 yard line. Parker McCary immediately chewed up some turf for 24 yards and a first down at the Prep 42. Jensen hit Weissenfels for ten yards to the 31 yard line. A personal foul penalty brought the ball back to the 46. Weissenfels then caught a pass from Jensen and took it to the 21. A nice run by McCary down to the 6 was nullified by a holding penalty putting the ball at the Bulldog 31. A Jensen to Weissenfels was then aided by a Bullpup unsportsmanlike flag and it was first down Bombers at the 6 yard line. Cade then hit Josh Mendoza from three yards out giving the Bombers a 21-7 lead but also yielding another 15 yard penalty against the Bombers for extracurricular activity in the endzone after the touchdown.

The Bullpups returned the penalty-aided kickoff back to the 49 yard line. Halonen then connected with Sam Lockett on a beautiful circus catch over Weissenfels outstretch arms for 37 yards and a first down on the Bomber 4 yard line. Jacob Stanfield then put up a wall and pushed the Bullpups back to the five. Braden Powell ensured the run would go no further on the next play. Halonen passed to Culp at the one yard line but Ryan Piper stopped his momentum. The ball came loose and Ryan Kriskovich recovered the fumble at the one yard line. Looking back, this could very well have been the play of the game.

Gonzaga Prep received the kickoff to start the third quarter and whatever Coach McKenna said in the locker room at halftime left a great impression. Starting on their own 22 yard line, the Anthony, Culp, and Halonen combination repeated their first touchdown drive. Ten consecutive running plays took the Bullpups down to the Bomber 17 yard line and made it look easy. Halonen then hit Dawson Emery for 17 yards and the comeback fires were stoked at 21-14 Bombers.

Cade Jensens pass on the third play of the next drive was intercepted by Jake Parola and returned to the Richland 35 yard line. One play later, Gonzaga Prep pulled off a stunning double-reverse pass, in the pike position, and Travis Hojnacki passed to a wide open Connor Halonen for a 35 yard touchdown and a clean slate for the Bullpups. Game tied at 21-21 with 6:09 remaining in the third quarter.

The remainder of the third quarter settle down with both teams exchaning punts. Gonzaga Prep got the ball at their own 15 yard line at the end of the third quarter and then got down to business. The Bullpups embarked on an 11 play drive. A beatiful Halonen run was negated by a holding penalty but it didn't keep Prep down for long as they drive down to the Bomber 15 yard line. Matty Carney, in for the injured Halonen, scrambled around the backfield to evade the Bomber defense and yielded a loss in yards but a nasty blindside block was called a personal foul against the Bullpup offense the ball back to the 38 yard line. On the next play Halonen, back in the game, went to the well again and tried to connect with Sam Lockett one more time with Adam Weissenfels covering. This time, Weissenfels won the battle on the slightly underthrown ball and came down the interception at the Bomber 3 yard line. Lockett was called for a facemask penalty so the Bombers had first down on the Bullpup 18 yard line with 6:03 remaining in the game.

The drive did not start out well. Parker McCary hit a wall for no yards and Cade Jensen was sacked on the next play for a loss of ten yards. On third and twenty, Jensen found the outstretched arms of Ryan Kriskovich who stumbled his way out to the 45 yard line and a fresh set of downs. Jensen to Sanderson and another Prep personal foul took the ball inside Bullpup territory to the 25. Sammy Cervantes got some love, catching the ball at the low pass and a first down at the 15 yard line. Parker McCary then put the season on his shoulders and ran through a giant hole to the one yard line with 2:34 remaining. McCary then survived one hit and spun his way into the endzone for a touchdown. Bombers 28, Gonzaga Prep 21.

But the drama didn't end their. Adam Weissenfels kicked off and it landed in the waiting arms of Prep's 6 foot 5 inch super athelete Devin Culp who ran through the Bomber kickoff team like a 5 year-old through Skittles. The only man between Culp and a game-tying touchdown was Weissenfels who hit him and not only stopped him but also stole his Skittles. Weissenfels strip-tackle gave the Bombers a first down at mid-field with 2:10 left in the game.

Parker McCary then took care of business helping the Bomber run out the clock on 4 consecutive runs and two first downs. With no timeouts remaining, the Gonzaga Prep team saw their season melt away.

This was a truly great game and both sides played with heart and passion, and should be very proud of their effort.

Now, the Richland Bombers are headed for the WIAA 4A State Semifinals for the third straight year and will meet the Central Valley Bears. This will be a rematch of last year's first round game in which the Bombers routed the Bears 27-0. Something tells me that this year's Bears team is more than ready for the challenge. Central Valley reached the semifinal by shutting out the Skyline Spartans 41-0.

The semifinal game will be held on Saturday, November 25, 2017 at 1:00PM at Edgar Brown Memorial Stadium in Pasco. Have all of your Thanksgiving Day crowd stay over for some great high school football and help the Bombers reach the finals in Tacoma. A special thanks to all of those people who made the trek to Spokane to watch this game, especially the busloads of students!! 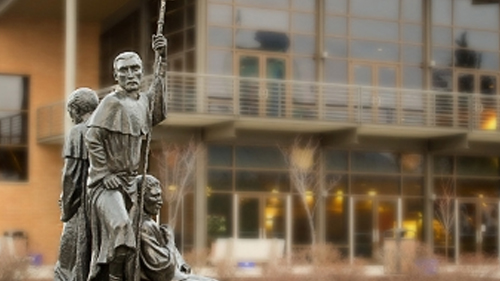